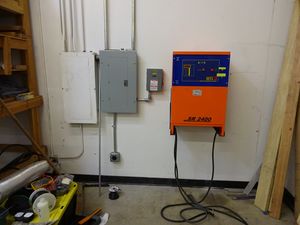 Fork lift charger, the blue/orange box toward the right of the photo. The electrical service is on the left.

Maker Nexus uses an Eagletronic ML2 charger, model SR2400, fork lift charger to charge its electric fork lift. The fork lift is powered by a 36 Volt battery located in a compartment below the operator's seat.

The charger is powered by a 208 Volt 30 Ampere circuit, through a wall mounted fused safety disconnect switch to the left of the charger. According to the charger's nameplate, the maximum input current is 27 Amperes. Output of the charger is 36 Volts DC, with up to 140 Amperes.

The charger's internal control circuitry is powered by 36 Volts DC. AC power goes through a contactor inside the charger. The contactor does not have power to close until the fork lift battery is connected.

Yellow and green indicator lights on the right side of the charger's control panel show the status of power to the charger. These two lights were added to the charger by Maker Nexus, and they operate independently of each other:

When both of these indicator lights are on, the charger operates automatically.

Charging the battery generates hydrogen gas, which can explode in concentrations of as little as 1%. Charging the fork lift battery requires ventilation of at least 90 cubic meters of air per hour.[1] The rollup door must always be open whenever the forklift is being charged. Never disconnect the charger until you have turned off the safety switch on the wall. 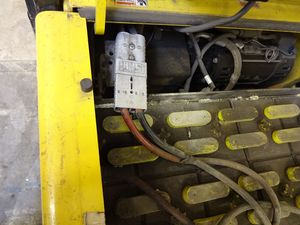 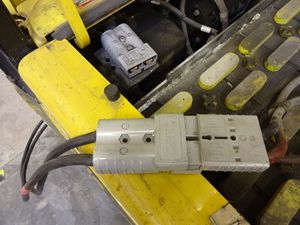 Connection between battery and charger 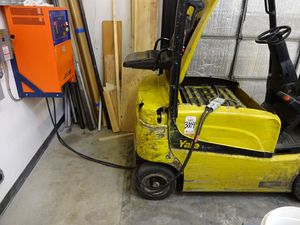 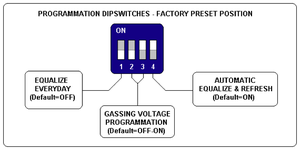 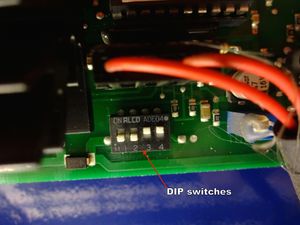 The illistration shows the purpose of four Duel Inline Package (DIP) switches on a circuit board inside the charger. The photo shows how the switches are actually set. Switches 1 and 2 are off, and switches 3 and 4 are on. These are the factory default settings.

Two indicator lights were added to the front panel of the charger to show the status of power and fork lift connections.

The green light is a Linrose model B1091M5 24V LED wired in series with a 1.5k Ohm 2W resistor to the charger output cable, which connects to the fork lift.